Clinical Advances in the Management of Myelofibrosis 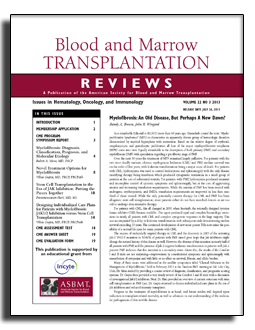 Myelofibrosis: An Old Disease, But Perhaps A New Dawn?

In a remarkable Editorial in BLOOD more than 60 years ago, Dameshek coined the term “Myeloproliferative Syndromes” (MPS) to characterize an apparently diverse group of hematologic disorders characterized by myeloid hyperplasia with maturation. Based on the relative degree of erythroid, megakaryocytic and granulocytic proliferation all four of the major myeloproliferative neoplasms (MPN) come into view. Equally remarkable is the description of both primary (PMF) and secondary myelofibrosis (SMF) with speculation regarding a pre-fibrotic stage of PMF.

Over the next 50 years the treatment of MPN remained largely palliative. For patients with the two most deadly variants, chronic myelogenous leukemia (CML) and PMF, median survival was on the order of five years, with leukemic transformation being a major cause of death. For patients with CML, hydroxyurea was used to control leukocytosis and splenomegaly with the only disease modifying therapy being interferon which produced cytogenetic remissions in a small group of patients at the cost of substantial toxicity. For patients with PMF, hydroxyurea produced transient and incomplete control of systemic symptoms and splenomegaly, but at the cost of aggravating anemia and increasing transfusion requirements. While the anemia of PMF has been treated with androgens, erythropoietin, and IMIDs, transfusion requirements are improved in less than one-third of those treated. While the only potentially curative therapy for CML and PMF has been allogeneic stem cell transplantation, most patients either do not have matched donors or are too old to undergo dose-intensive therapy.

For patients with CML, this all changed in 2001 when Imatinib, the rationally designed tyrosine kinase inhibitor (TKI), became available. This agent produced rapid and complete hematologic remissions in nearly all patients with CML and complete cytogenetic responses in the large majority. This was accompanied by a delay in leukemic transformation with subsequent trials demonstrating median survival exceeding 10 years. The continued development of new more potent TKIs now raises the possibility of a normal life span for many patients with CML.

The success of molecularly targeted therapy in CML and the discovery in 2005 of the activating Jak-2 V617-F mutation in 50-60% of patients with PMF raised great hope that Jak inhibitors might change the natural history of this disease as well. However, the absence of this mutation in nearly half of all patients with PMF, and the presence of Jak-2 negative leukemic transformation in patients with Jak-2 positive PMF indicates that this mutation is a secondary event. Given this, the results of the Comfort I and II trials are not surprising—improvement in constitutional symptoms and splenomegaly with exacerbation of cytopenias and with little or no effect on survival, fibrosis, and allelic burden.

Many of these issues were addressed in the satellite symposium titled “Clinical Advances in the Management of Myelofibrosis,” held in February 2013 at the Tandem BMT meeting in Salt Lake City, Utah. Dr. Mesa started by providing a concise review of diagnosis, classification, and prognostic scoring systems. Dr. Gupta then provided a very timely review of the Comfort I and II trials with a discussion of investigational Jak1/2 inhibitors. Next, Dr. Hari provided an overview of current outcomes with stem cell transplantation in PMF. Last, Dr. Gupta returned to discuss individualized care plans in the era of Jak inhibitors and reduced intensity transplants.

Progress in the treatment of myelofibrosis is at hand, and future strides will depend upon reduction in transplant-related mortality, as well as advances in our understanding of the molecular pathogenesis of this terrible disease.