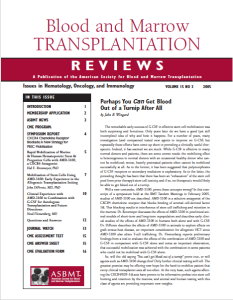 Perhaps You Can Get Blood Out of a Turnip After All

The remarkable early success of G-CSF in effective stem cell mobilization was both surprising and fortuitous. Only years later do we have a good (yet still incomplete) idea of why and how it happens. For a number of years, many investigators (and companies) tested new agents to improve on G-CSF, but repeatedly these efforts have come up short in providing a clinically useful therapeutic. Indeed, it has seemed we are stuck. While G-CSF is effective in many normal donors and patients, there are some unmet needs: the mobilizing effect is hetereogenous in normal donors with an occasional healthy donor who cannot be mobilized; worse, heavily pretreated patients often cannot be mobilized successfully at all. As to the former, it has been suggested that polymorphisms of G-CSF receptors or secondary mediators is explanatory. As to the latter, the prevailing thought has been that there has been an “exhaustion” of the stem cell pool from prior therapy’s stem cell toxicity, and if so, no therapeutic would likely be able to get blood out of a turnip.

Will a new contender, AMD-3100, prove these concepts wrong? In this transcript of a symposium held at the BMT Tandem Meetings in February 2005, studies of AMD-3100 are described. AMD-3100 is a selective antagonist of the CXCR4 chemokine receptor that blocks binding of stromal cell-derived factor 1α. This blocking results in interference of stem cell trafficking and retention in the marrow. Dr. Broxmeyer discusses the effects of AMD-3100 in preclinical animal models of short-term and long-term repopulation and describes early clinical studies of the effects of AMD-3100 in humans both alone and with G-CSF. Dr. DiPersio describes the effects of AMD-3100 in animals to explore effects on graft-versus-host disease, an important consideration for allogeneic HCT since AMD-3100 also alters T-cell trafficking. Dr. Flomenberg reports preliminary findings from a trial to evaluate the effects of the combination of AMD-3100 and G-CSF in comparison with G-CSF alone and notes an important observation, that successful mobilization was achieved with the combination in some patients who could not be mobilized with G-CSF alone.

So, will the old saying “You can’t get blood out of a turnip” prove true, or will agents such as AMD-3100 change this? Only further clinical testing will tell. The greatest promise may be offering new hope for the hard-to-mobilize patient that every clinical transplanter sees all too often. At the very least, such agents affecting the CXCR4/SDF-1α axis have proven to be informative probes into stem cell homing and retention by the marrow, and animal and human testing with this class of agents are providing important new insights.