Emerging Strategies in the Treatment of Chronic Graft-versus-Host Disease 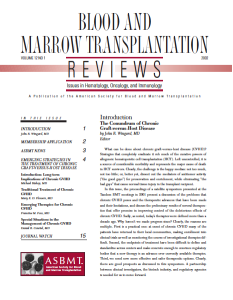 What can be done about chronic graft-versus-host disease (GVHD)? Strategies that completely eradicate it rob much of the curative powers of allogeneic hematopoietic cell transplantation (HCT). Left uncontrolled, it is a source of considerable morbidity and represents the major cause of death in HCT survivors. Clearly, the challenge is the happy median: not too much, not too little; or, better yet, dissect out the mediators of antitumor activity (“the good guys”) for preservation and enrichment, while eliminating “the bad guys” that cause normal tissue injury in the transplant recipient.

In this issue, the proceedings of a satellite symposium presented at the Tandem BMT meetings in 2001 present a discussion of the problems that chronic GVHD poses and the therapeutic advances that have been made and their limitations, and discuss the preliminary results of several therapeutics that offer promise in improving control of the deleterious effects of chronic GVHD. Sadly, as noted, today’s therapies were defined more than a decade ago. Why haven’t we made progress since? Clearly, the reasons are multiple. First is a practical one: at onset of chronic GVHD many of the patients have returned to their local communities, making enrollment into clinical trials as well as monitoring the course of investigational therapies difficult. Second, the endpoints of treatment have been difficult to define and standardize across centers and make concrete enough to convince regulatory bodies that a new therapy is an advance over currently available therapies. Third, we need new more effective and safer therapeutic options. Clearly, there are good prospects as discussed in this symposium. A partnership between clinical investigators, the biotech industry, and regulatory agencies is needed for us to move forward.