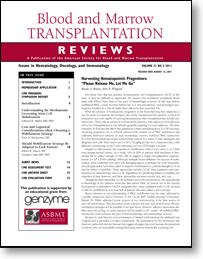 by Randy A. Brown and John R. Wingard

For those who did not practice hematopoietic cell transplantation (HCT) at the time, it may be difficult to appreciate the impact that mobilized peripheral blood stem cells (PBSC) have had on the pace of hematologic recovery. In the days before mobilized PBSC, count recovery before day +21 was uncommon, and prolonged neutropenia resulted in a risk of death from infection that exceeded 5%.

While the presence of hematopoietic progenitors in the blood had long been suspected, it was the work of Goodman and Hodgson that clearly demonstrated the presence in blood of pluripotent stem cells capable of restoring hematopoiesis when transplanted into lethally irradiated mice. These cells are present at such low levels, however, that collection of enough stem cells to do a transplantation is very difficult, generally requiring 5 or more apheresis. The demonstration by Duhrsen and others that granulocyte colony-stimulating factor (G-CSF) increases circulating progenitors 10- to 100-fold ushered in the modern era of PBSC mobilization and collection. Motivated primarily by rapid hematologic recovery, mobilized PBSC enumerated by CD34 determination has largely replaced bone marrow as a source of both autologous and allogeneic stem cells. Most centers use G-CSF at 10 μg/kg per day for 4 consecutive days, with apheresis commencing on day 5 and continuing until the CD34 target is reached.

Despite its effectiveness, the response to mobilization with G-CSF varies 2- to 3-fold even among normal donors. As a result, 10% to 20% of patients with myeloma or lymphoma fail to collect enough CD34+ cells to support a single transplantation (approximately 2 × 106 CD34+ cells/kg). Although multiple factors influence the success of mobilization, prior treatment with stem cell–damaging agents is perhaps the most important. Several approaches have been taken to improve mobilization in patients thought to be at risk for failure to mobilize. These approaches include G-CSF dose escalation and combinations of chemotherapy and G-CSF. Algorithms for predicting failure to mobilize are imperfect at best, however, and these approaches increase toxicity, risk, and cost.

Though the observation that G-CSF mobilizes stem cells was fortuitous, the rapid growth in knowledge of the adhesive molecules that anchor PBSC in marrow led to the rational development of plerixafor-a CXCR4 antagonist that, when combined with G-CSF, can lead to effective mobilization in at least half of patients who have failed a prior attempt.

Recent advances in our understanding of PBSC mobilization was the topic addressed in a satellite symposium held in February of 2011 at the BMT Tandem meeting in Honolulu, Hawaii. Dr. Waller addressed recent progress in our understanding of the basic science of stem cell mobilization. This discussion clearly indicates that new and possibly more effective mobilization strategies will be available in the near future. However, adhesive interactions also effect stem cell cycling, so careful attention will be needed to the “quality” of mobilized PBSC because this could influence the pace of both hematologic and immunologic recovery.

Because we must function in an environment of limited reimbursement, the additional cost of agents such as plerixafor is a major consideration. The presentations by Drs. McSweeney and Stuart are particularly relevant because they suggest strategies that could increase the proportion of patients who can successfully undergo harvesting without dramatically increasing cost.