Interactive Updates in the Prophylaxis Management of Hemophilia 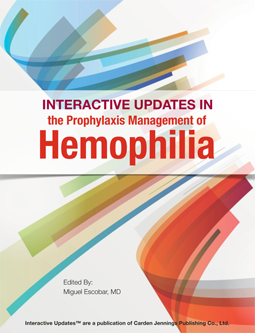 Carden Jennings Publishing Co., Ltd., a leader in multimedia medical education and publishing, is pleased to announce release of another title in the series of its CJP Interactive Updates™, Grand Rounds in Hematology: Interactive Updates in the Prophylaxis Management of Hemophilia

Hemophilia is a sex-linked genetic disorder characterized by the deficiency or absence of one of the clotting proteins in plasma. Severe deficiency results in spontaneous bleeding into the joints and recurrent bleeding which, in turn, leads to hemophilic arthropathy, disability, and reduced quality of life. Currently, there is no known cure for hemophilia, so treatment goals include preventing bleeding, recognizing bleeding episodes, and providing prompt treatment and intervention to prevent complications.

Grand Rounds in Hematology: Interactive Updates in the Prophylaxis Management of Hemophilia includes expert contributions, imagery, and audio commentary on the following topics:

The Era of Personalized Prophylactic Regimens

Prevention of Arthropathy in Hemophilia