The Role of Cytotoxic Therapy with Hematopoietic Stem Cell Transplantation in the Therapy of Multiple Myeloma: An Evidence-Based Review 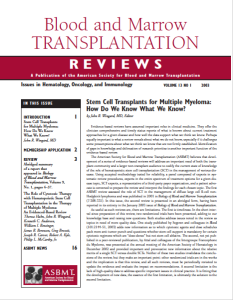 Stem Cell Transplants for Multiple Myeloma: How Do We Know What We Know?

Evidence-based reviews have assumed important roles in clinical medicine. They offer the clinician comprehensive and timely status reports of what is known about current treatment approaches for a given disease and how well the data support what we think we know. Perhaps equally important is what a review reveals about what we do not know, especially if it challenges some presumptions about what we think we know that are not firmly established. Identification of gaps in knowledge and delineation of research priorities is another important function of the evidence-based review.

The American Society for Blood and Marrow Transplantation (ASBMT) believes that development of a series of evidence-based reviews will address an important need of both the transplant community and a larger non-transplant audience to codify the current state of knowledge of the role of hematopoietic stem cell transplantation (SCT) in the management of various diseases. Using accepted methodology tested for reliability, a panel composed of experts in systematic review procedures, experts in the entire spectrum of treatment options for a given disease topic, SCT experts, a representative of a third-party payer organization, and a patient advocate is convened to prepare the review and interpret the findings for each chosen topic. The first ASBMT review assessed the role of SCT in the management of diffuse large cell B-cell non- Hodgkin’s lymphoma and was published in 2001 in Biology of Blood and Marrow Transplantation (7:308-331). In this issue, the second review is presented in an abridged form, having been reported in its entirety in the January 2003 issue of Biology of Blood and Marrow Transplantation.

As useful as such reviews are, there are limitations. The first is timeliness. In the short interval since preparation of this review, two randomized trials have been presented, adding to our knowledge base and raising new questions. Both studies address issues noted in the review as topics in need of more quality data. One study published by Segeren and colleagues in Blood (101:2144-51, 2003) adds new information as to which cytotoxic agents and dose schedules pack more anti-tumor punch and questions whether stem cell support is mandatory for certain cytotoxic regimens which are “dose-dense” but not stem cell ablative. The second, not yet published in a peer-reviewed publication, by Attal and colleagues of the Intergroupe Francophone du Myelome, was presented at the annual meeting of the American Society of Hematology in December 2002 and provided important and provocative new information about the relative merits of a single SCT versus double SCTs. Neither of these two studies invalidates the conclusions of the review, but they make an important point: other randomized trials are in the works and the implication is that this review, and all such reviews, must be periodically revisited to update the evidence and evaluate the impact on recommendations. A second limitation is the lack of high-quality data to address specific important issues in clinical practice. It is fitting that the development of new data, the essence of the first limitation, is ultimately the solution to the second limitation.